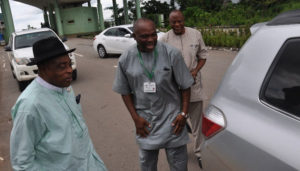 Monday, September 21, 2020, marked the maiden visit of the new Pro-Chancellor and Chairman of Governing Council for Alex Ekwueme Federal University Ndufu-Alike, Emeritus Professor Nimi Dimkpa Briggs, to the University, since his appointment on July 13, 2020, alongside others, for the 12 new Universities founded by the Goodluck Jonathan administration in 2011.

The Pro-Chancellor, who arrived the University campus in the company of his lovely wife, Mrs Data Briggs, was received at the University main gate by the Vice-Chancellor, Professor Chinedum Nwajiuba in the presence of Principal Officers and other top functionaries of the University, who were duly introduced to the special guest of honour.

Special ride around the University to familiarize the Pro-Chancellor with the University environment started from administrative block to take off-site, renamed Zone A of the University campus, in line with the ongoing unification and transformation to one big Campus in a Garden. Prof. Briggs and wife, in the company of other officers of the university, were taken round all the faculties, centres, major facilities and landmarks in the university, with VC, Prof. Nwajiuba providing details on all the locations visited, as the tour progressed.

The major areas and points visited include Security Post, Catholic and Anglican Chaplaincies (ongoing), faculties of Humanities, Education, Engineering and Technology, Science, Agriculture, Law, Management and Social Sciences, College of Medical Sciences, School of Post-Graduate Studies, Language and Igbo Centres, Arts Theatre, AE-FUNAIWA school building, New Administrative Block, Convocation Arena, Solar Power Plant, which Prof. Briggs confirmed that is not just the first, but the best in Nigeria. Among the places and things inspected, were also the network of internal roads, walkways and adorable trees, building up to the campus in a garden and many other ongoing project sites.

The memorable tree planting by the Pro-Chancellor and his wife, to mark his first visit to the University was done in front of the main auditorium. Prof. Nwajiuba used the opportunity to do another round of introduction of the Pro-Chancellor, Prof. Nimi Briggs and his amiable wife, Mrs Data Briggs, to the University Officers, who gathered to witness the special tree-planting ceremony. Prof. Briggs thanked the University management for giving them the privilege to plant trees to mark his first visit, and establish himself as part of the community, expressing his delight in strong terms thus: ‘’VC, you and your team have done exceptionally well within five years of your administration here”. From that point, Prof. Briggs was led to his office, where the Registrar and Secretary to Council showed him round the facilities and introduced the staff to him.

At the Senate Chamber, venue of the reception proper, Prof. Abel Ezeoha, who led opening prayer, thanked God for the presence of the Pro-Chancellor and his wife and prayed that his coming to AE-FUNAI shall end in glory.

VC, Prof. Nwajiuba went on to introduce all the university officers present at the reception hall, after which the traditional kola nut was presented to the Pro-Chancellor in the AE-FUNAI custom of receiving special guests and mark of honour and hearty welcome.

The DVC (Administration), Prof. Philip Omoke took charge of the presentation protocol and the blessing in the language of the land, was done by Mr Ikechukwu Elom, SA(Documentation). The university choir led by Jaye Folorunsho of the Music Department was on ground to spice up the event with renditions of a variety of songs of praise to God.

Elated Prof. Nwajiuba, formerly presented the 3rd Pro-Chancellor and Chairman of the University Governing Council, Emeritus Prof. Nimi Dimkpa Briggs and his dear wife, Mrs Data Briggs, extolling his virtues and accomplishments in the academic and university administration. He announced that the gathering was therefore to herald the presence of the new Pro-Chancellor and Chairman of Council. He then heartily welcomed him in these words: “Welcome to AE-FUNAI where it has pleased God that you become the third Pro-Chancellor”.

Further in his welcome speech, Prof. Nwajiuba inferred that it is a mark of how serious the Federal Government takes this University, that they sent, a man whose colleagues refer to as numero uno Pro-Chancellor, to us. The VC was bold to affirm that AE-FUNAI’s appellation as ‘a serious public university’ in Nigeria, was invested on her by no less a personality and institution than the German Ambassador to Nigeria, when the university management paid him a courtesy visit at their Abuja Embassy, some time ago. He added that this rating was based on the visible commitment of the University and hard work, in achieving success in her tripod mandate, viz: Teaching and Learning, Research, and Community Service.

The VC justified the branding of AE-FUNAI as the most serious public university in Nigeria, listing key parameters as pointers to seriousness. According to him, AE-FUNAI is the only Public University that concluded the first semester of the 2019/2020 academic session before the COVID-19 lockdown, whereas some universities are still battling with the 2018/2019 session; Here lectures start the first week of resumption with 99% of lecturers in the classroom teaching, and on resumption, students rush back to school, unlike in other public universities, where students take extra one month and more, before returning for studies. And once the COVID-19 lockdown is over, the university will move into the second semester of the 2019/ 2020 session.

Prof. Nwajiuba stated that the Quality Assurance Unit is active and working, ensuring the suitability of examination questions, marking and grading of students. He told the Pro-Chancellor that AE-FUNAI remains the only public university today, where students get their results while still at home on holidays and are graduated in good time to regularly meet the NYSC schedule, which they have never missed. The Vice-Chancellor also stated that the university has held four consecutive convocations in December of each year, since 2016, with the pioneer graduating set.

Prof. Nwajiuba was proud to tell the Pro-Chancellor that in a nutshell, that is the University which God has sent you to. He ended his speech in these words: “Thank you, sir, we join in prayers that God will bless the works of your hands, that your period of service in AE-FUNAI will be one to the glory of God, in Jesus’ name”.

Responding to the Vice-Chancellor’s pleasant remarks, Emeritus Prof. Nimi Briggs stated that though he was not present at his inauguration alongside the other recently appointed Pro-Chancellors of the twelve universities established in 2011, and has not been able to visit the university as others would have done immediately after their inauguration in July 2020, due to some circumstances, affirming that he is ready to start work fully and revealed that he has been in constant touch with University’s Management and Council members via Zoom meetings during which some major decisions have been made, and further informed his audience that Council meeting has been scheduled for October 2020, when he will formally receive all the other members and have one–on–one contact with them.

Prof. Briggs was delighted that he was being honoured in such magnitude, stating that ” we are electrified about the level of welcome you have given my wife and I”. He also expressed appreciation to the Rivers State community in the university, for joining management to receive him, urging them to be responsible citizens of the community, contributing to its growth. He as well took particular interest in the songs rendered by the choir in Kalabari language of his home state, which he interpreted as being full of praises to God, confirming the common saying here that “AE-FUNAI is God’s own project”. He implored God to continue to bless the institution.

The Pro-Chancellor applauded the level of excellence he saw exhibited in the university since his arrival, which to him justify the position of the university, as showpiece and pacesetter for the community, reiterating that excellence is the essence of the university. He adduced that “AE-FUNAI, in no small measure represents this position…Since 1975, I have had the experience of virtually all universities in Nigeria, what I have seen coming here today, impressed me tremendously”.

He, however, noted that the secret of the success as revealed to him by the Registrar is that all staff of the university are committed to the institution, asserting that getting to the top is important but staying at the top is more important, and pledged that the new Council will evolve policies that will enhance what is already happening. The erudite Professor confirmed his conviction that the university is indeed a very serious one and elected to stand firm in selling the dictum that ”AE-FUNAI is the most serious public university in Nigeria”.

Registrar, Mrs Odisa Okeke, giving the vote of thanks, on behalf of management and staff, thanked Prof Briggs and his dear wife, whom she referred to as ‘Papa and Mama’ AE-FUNAI, for visiting, recalling the overwhelming excitement that welcomed the news of the appointment of a man of his status and repute in the world of the academia and university administration with such intimidating CV, as the Pro-Chancellor and Chairman of Council of the young university. “We are in a very good moment, having you, one of the best among all the Pro-Chancellors appointed recently”, she enthused, pointing out that he has kept on presenting and representing the university very well since his appointment. She prayed that God would bless him as he continues to give his best for the continued growth and wellbeing of the young, fast-growing and serious university.

Highlights of the event include the decoration of ‘ Mama AE-FUNAI’, Mrs Data Briggs with a gift of an AE-FUNAI branded Akwaete cloth, produced by the AE-FUNAI Centre for Indigenous clothing, by Dr Mrs Chinyere Nwajiuba, wife of the Vice-Chancellor.