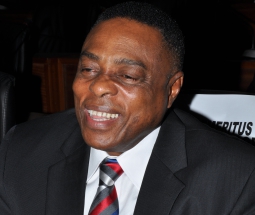 BRIEF ENLIGHTENMENT TALK ON THE PROSTATE GLAND HELD AT ITS AUGUST 2016 MEETING.

I thank the president for the invitation to deliver this brief enlightenment talk. Most of you will remember that when you studied the biology of the urinary system in man in secondary school, you were taught that the system consists essentially of a pair of kidneys situated at the back of the upper part of the abdomen where, among others, urine is made and from which a pair of ureters run downwards, leading the urine into the urinary bladder in the pelvis where the urine is stored temporarily. When conditions are appropriate, urine is voluntarily voided from the bladder via a single tube, the urethra, which passes through the penis to the exterior in males. There was no mention whatsoever of a prostate gland. And indeed, the prostate gland is not part of the urinary system but paradoxically, the gland has acquired notoriety for the serious problems it causes in relation to the urinary system, to which it does not belong. Urinary retention (inability to pass urine), poor urine stream, hesitancy, dribbling of urine, frequency of micturition, urgency and even passage of blood in the urine, are all serious urinary symptoms which are, not infrequently, traceable to prostate pathology, especially in elderly males. This is so because of the close anatomical relationship that the prostate gland has with some parts of the urinary system: the gland completely surrounds the urethra at the point the urethra takes its exit from the base of the urinary bladder on its way to the penile organ in the male.

The prostate is a groundnut seed-size gland which plays an important role in the male reproductive system, of which it is part. So, women do not have prostate glands and are, happily, free from all the problems that this small organ causes. The gland secretes an alkaline and liquefying prostatic fluid into semen containing spermatozoa that are produced in the the testes and stored in the epididymis, as the semen passes along the vas deferens from the epididymis to the penis at ejaculation. In this form, the seminal fluid lubricates spermatozoa and offers them a medium to flagellate and swim as well as providing them with rich sources of energy on their long journey through the vaginal tube, cervical canal and uterine cavity to the female fallopian tubes where, if an ovum is in place, conception could take place following sexual intercourse.

The anatomical position of the prostate gland (it completely surrounds the urethra at the base of the urinary bladder) means that if the gland grows bigger in size more than what is normal, as it commonly does in many elderly males, it can irritate and or occlude the lumen of the urethra to varying degrees with consequences and this is the basis of the common prostatic problems that a good number of men over 50 years complain of. Thus, prostate enlargement can irritate the base of the bladder and urethra giving rise to increased frequency of urination and urgency or occlude the lumen of the urethra either partially or completely to give rise to hesitancy, poor urine stream, or total inability to pass urine. When the passage of urine from the bladder is completely blocked, doctors treat the emergency by relieving the obstruction through the passage of a urinary catheter – usually a Foley’s, which can be retained for some time to allow for decision on subsequent mode of care.

Prostatic enlargement is usually recognised through digital rectal examination and an imaging procedure – usually a pelvic or rectal ultrasonography (scan). It is also recognised through the estimation of a marker in the blood, a protein called prostate specific antigen (PSA), the value of which can be estimated in appropriately kitted laboratories. Prostate enlargement is a disease that is commoner in Africans, over 50 years of age and those with a strong family history. The enlargement occurs in two forms – benign (Benign Prostatic Hypertrophy- BPH) and malignant (Prostate Cancer). BPH is associated with urinary symptoms as already stated but prostate cancer is like cancer anywhere that could disseminate and so cause problems locally and at distant sites. Prostate cancer is an important cause of haematuria (blood in the urine).

PSA is secreted by cells of the prostate gland directly into the blood stream and it does so in small quantities when the gland is of normal size. It is measured in nanograms per milliliter (ng/ml). Values of < 4ng/ml are usually accepted as normal. Above this, concerns about prostate enlargement are entertained and steps are recommended to confirm the situation. Of course, high values, such as > 9ng/ml or values that have risen quickly over a period of time are usually taken to be strongly suggestive of prostate cancer.

Depending on several factors – age, general state of health, co-existing morbidities and others – doctors manage patients with prostatic enlargement using different approaches. Urinary retention is always relieved through catheterization which is, thereafter, often followed by a procedure to reduce the size or remove the prostate gland completely. The commonest operation done by urologists (doctors who are specialised in the management of patients with urinary problems) for prostate reduction is the Trans Urethral Resection of the Prostate (TURP) where an instrument is passed through the urethra in the penis on to the prostate at the base of the bladder and portions of the gland removed piecemeal. Haemorrhage could be intense and unfortunately the reduced prostate gland occasionally grows back to cause symptoms again after some years.

The removed pieces of prostatic tissues are examined for the presence of cancer. If some cancerous cells are found, other forms of management have to be considered. Prostate cancer is usually graded but the wish is always to detect the disease early – when the cancerous cells are well defined and have not migrated outside the capsule that surrounds the prostate gland. In this form, the chances of a cure are extremely high and complications either from the disease or the mode of management, reduced.

Prostate cancer is treated with surgery, radiotherapy including laser and chemotherapy, alone or in combination – a decision that is arrived at, commonly after a tripartite discussion between the patient, health team (especially the urologist) and family. Most patients opt for surgery where the cancerous prostate gland is completely removed together with adjacent tissues (radical prostatectomy) which these days is commonly carried out by experts with the assistance of a laparoscope and robotic machine. Blood loss is conserved and so is damage to adjunct tissues, especially the nerves and blood vessels involved in urinary continence and penile erection thereby minimizing immediate and long term post-operative morbidity and complications. Even with this, urinary incontinence and failure to have strong penile erection may tarry for quite some time after radical prostatectomy. Advanced prostate cancer – one that has extended beyond the capsule of the gland and outside the pelvis is difficult to manage and usually involves the use of more than one approach. The disease and its management take their toll not just on the patient but also on the patient’s family. Indeed, there are many ways of tackling problems from the prostate gland. But not doing anything is not one of them.

The cause of prostate enlargement, especially the type associated with cancer is not known. It appears to be age and ethnic related. But persons with some characteristics are also said to be more likely sufferers – positive family history, sedentary, overweight, smoker, inappropriate nutrition. So, in advising on how to avoid prostate cancer, the usual list for overall healthy living for the avoidance of not just prostate cancer but also other diseases and forms of cancers, is usually recited: age and sex-related health consciousness, regular physical activities with exposure to sunlight, abhorrence of smoking, moderate alcohol consumption, avoidance of obesity, a mediterranean diet – high consumption of vegetables, fruits, legumes, nuts and fish with moderate intake of meat and carbohydrates.

I have a concise book from which everyone can benefit which is written in a simple style on this important organ THE PROSTATE SMALL GLAND BIG PROBLEM by one of the world’s leading experts on the prostate gland, Professor Roger S Kirby, Director, The Prostate Centre, Wimpole Street, London and former Chairman, Prostate UK (info@theprostatecentre.com). I will be ready to share it with those who are desirous of knowing more about this problematic gland called prostate.