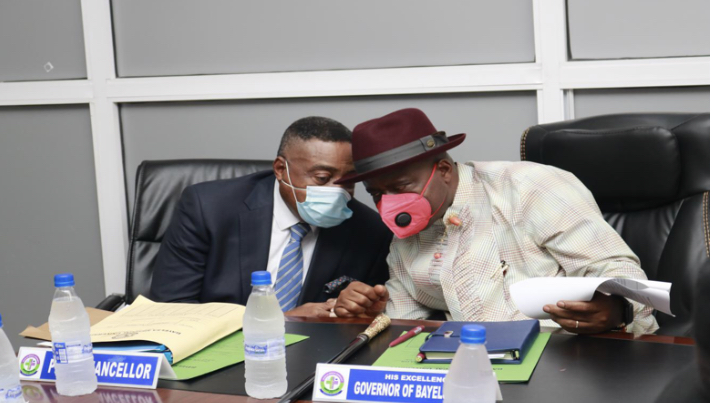 OFFICE OF THE VICE-CHANCELLOR

HIS EXCELLENCY SENATOR DOUYE DIRI, EXECUTIVE GOVERNOR OF BAYELSA STATE AND VISITOR TO THE BAYELSA MEDICAL UNIVERSITY (BMU), HAS PLEDGED TO  CONSTRUCT A BEFITTING SENATE BUILDING FOR THE UNIVERSITY  AS HE EMBARKED ON HIS FIRST WORKING VISIT AS VISITOR, ACCOMPANIED BY  THE HONOURABLE COMMISSIONERS FOR EDUCATION  AND HEALTH IN BAYELSA STATE.

THE GOVERNOR WAS RECEIVED BY EMERITUS PROFESSOR NIMI BRIGGS (OON), PRO CHANCELLOR/CHAIRMAN OF COUNCIL, THE VICE-CHANCELLOR AND MANAGEMENT OF THE BAYELSA MEDICAL UNIVERSITY –TUESDAY, 12th JANUARY, 2021.

The pronouncement was made at the Council Chambers of the University by His Excellency the Governor during his inaugural working visit as Visitor to the University. The Governor who had in his entourage, the Commissioner for Education, the Commissioner for Health and top Government functionaries was received by Emeritus Professor Nimi Briggs, Pro-Chancellor and Chairman of Council of the Bayelsa Medical University, the Vice-Chancellor, Professor Ebitimitula N. Etebu as well as Management of the University.

The “Miracle Governor “ as he is fondly called, who is a seasoned administrator, a professional to the core, an education-friendly Governor and a former teacher visited BMU with a view to evaluate the progress made so far and clearly understand the challenges of the University and provide Government support to them.
On arrival, the Governor was welcomed by Emeritus Professor Nimi Dimkpa Briggs (OON), a Nigerian academic, scholar and EmeritusProfessor of Obstetrics and Gynaecologywho has served in various capacities as Vice-Chancellor of University of Port Harcourt twice, Chairman Committee of Vice Chancellors of Nigerian Universities and chairman of the Board of the National Hospital. Chairman of the Rivers State Economic Advisory Council and the Rivers State Community Foundation and many other portfolios asPro Chancellor of two Federal Universities and one State University in Nigeria.

In the opening remark, the Pro-Chancellor thanked the Governor for the visit and congratulated him on his numerous court victories which gave rise to the appellation  “Miracle Governor”. He equally thanked the former Governor of Bayelsa State Senator Henry Seriake Dickson for appointing a Governing Council for the Bayelsa Medical University and reassured Governor Douye Diri that the Governing Council will do its duties in accordance with the laid down laws of the institution. He further assured that the Council will be respectful and loyal to the Government and people of Bayelsa State. Emeritus Professor Nimi Briggs described Governor Diri as a man who, right before the time he was sworn-in as the Governor of Bayelsa State,  has excelled in both the Green and Red Chambers, in administration, business, as a Commissioner, as an academician and today in his capacity as Governor and Visitor to the Bayelsa Medical University.

On his part, the Vice-Chancellor, Prof Ebitimitula Etebu, while giving stewardship of his tenure so far stated that the Bayelsa Medical University started operations in October 2018 and opened its doors to the first set of students in April 2019. According to the Vice-Chancellor, In July 2019, the National Universities Commission undertook a resource verification exercise of the university after which it approved Biology, Chemistry, Physics, Mathematics, Anatomy, Statistics, Physiology, Biochemistry and Microbiology as programmes for the University. He added that the University currently runs seven Faculties-Science, Basic Medical Sciences, Clinical Sciences, Health Sciences, Dental Sciences, Faculty of Basic Clinical Science and Pharmaceutical Sciences.

Professor Etebu added that it is the desire of BMU to introduce the Faculty of Biomedical Engineering and Technology to groom expertise in the manufacturing and maintenance of medical equipment. He pleaded with the Government to intervene urgently for the completion of the University Teaching Hospital, the Commissioning of the Mother and Child Referral Hospital, the Reopening of the Bayelsa Diagnostic Centre, the Completion of the Faculty of Basic Medical Sciences and Laboratories, the Building of the Faculty of Basic Clinical Sciences, Building of a standard library, the building of an Animal House, the building of a Centre for Entrepreneurship and General Studies, the building of an Institute of Foreign Languages And Biomedical Translations and the provision of an adequate monthly subvention among other needs adding that this will help BMU to achieve its full potential of accreditation with NUC and other regulatory bodies.

The Vice-Chancellor requested the official handing over of all existing Centres within the premises of the University such as the Bayelsa Diagnostic Centre, the Malaria Tuberculosis and Aids Centre, the Mother and Child Hospital and the Molecular Laboratory to the Governing Council as it will advance the chances of securing accreditation for all its Medical Programmes.

Responding, His Excellency Senator Douye Diri expressed his gratitude to the Governing Council and Management of the University for taking proper care of the University, a place of history which was first established as a General Hospital by the Government of late Governor Diepreye Alamieyeseigha and was later transformed to the Bayelsa Medical University by Senator Henry Seriake Dickson. He harped on the need to appreciate former Governors who have contributed their quota to the growth of Bayelsa State, adding that his government will continue to build on the growth and sustenance of such noble projects.

The Governor also extolled the virtues of the ProChancellor and Chairman of Council, Emeritus professor Nimi Briggs who he revealed was the Vice-Chancellor of his Alma Mata (University of Port Harcourt). He stated that the presence of the Pro-Chancellor can only impact positively on the growth of BMU, Bayelsa State and Nigeria in general.

On the request for urgent intervention, the Governor promised to look into the request noting that education is his Government’s priority and cautioned that failure to encourage education will result in building large prison walls. He directed the Ministry of Education and Health to work with the Management of the University to achieve results.

The Governor was taken on a facility tour to the Bayelsa State Diagnostic Centre, the Administrative Offices such as Audit Unit, Procurement Unit, Legal Unit, Student Affairs Department, Admissions Office, the Auditorium, the Cafeteria, the 500 Bed Hospital (the theatre, the wards, the A and E, Biology, Microbiology, Chemistry and Physics laboratories, the University Library and the Institute of Foreign Languages and Bio-Medical Translations)and other facilities.